In Toward the Light you can
find the following reference to Atlantis:

“The second empire that perished was a large island in the Atlantic Ocean, the so-called Atlantis. In the remote past this island was connected with the southern part of North America, but through volcanic activity it became separated from the mainland.

The shape of the island can reasonably well be compared to a diagonally elongated, inverted Latin “S” – the upper curve at the right, and the lower at left. The island’s northernmost point extended to about latitude 40 degrees North, longitude 34 degrees West. The island extended south to about latitude 25½ degrees North, and west to longitude 47 degrees West, latitude 27½ degrees North, and eastward to about longitude 28 degrees West. An imaginary line from the town of Plymouth in England to the centre of the island of Trinidad would cut through the length of the island and touch its easternmost and southernmost points. Thus, the larger half of the island would lie west of this line. The position given is only an approximate one, since the coastline of the sunken island is constantly changing due to major or minor upheaval and subsidence in the ocean floor; investigations that might be undertaken would show it to be within the indicated area.

The area of the Island was 5/6 that of the Iberian Peninsula. The Azores, located North North East of the island, was uninhabited at that time, but they had been connected with it in a more remote past.

Some minor groups of islands were situated between the Azores and the Iberian Peninsula; there were also some small islands South West and South East of the Atlantic island, but all of these have now disappeared.

This island empire was destroyed about 12.000 B.C. by subsidence of the ocean floor in conjunction with violent volcanic eruptions.

Earthquakes and volcanic activity ravaged the entire island for about ten months until the final catastrophe completely destroyed and obliterated the rich and cultured empire within a few hours. The final eruption created a flood, the effect of which reached far and wide. The memory of this flood is still retained in the ancient legends of many peoples.

Polytheism predominated here also, but at that time without human sacrifice. However, animals were scarified throughout the island. The inhabitants were sun and fire worshippers. The people were generally at a high cultural level. The priests had quite an advanced knowledge of astronomy – several were astrologers 1) or magi – and were able to distinguish between the planets and the fixed stars and to calculate approximately the eclipses of the sun and the moon; however, they attributed these phenomena to the invention of an evil spirit.

The art of printing made its first primitive appearance on this island, the priests having managed, by a form of hectography, to produce multiple copies of the written accounts. For this purpose an extract of crushed animal and fish bones was used, which after careful distillation was poured into flat earthenware moulds. Closely woven fabrics of plant fibbers were used, since neither papyrus nor parchment was known at that time. Impressions were made with a printing ink consisting mainly of burnt bone mixed with some adhesive substance. Pictographic text was mostly used, though ideographs were used in some places.

Agriculture, hunting, fishing and a certain amount of animal husbandry were known. Several of the merchants traded with the surrounding islands and the nearest mainland coasts. The production by hand of clay utensils was widespread; basins, bowls and vases were often engraved with ornamental animals and leaves, whose outlines were filled in with brilliant colours.
Gold, copper and to some extent silver were all known and used for jewelry and finer utensils, as well as for inlays in the carved wooden images of the gods. Many such pictures were hewn in stone or formed out of various metallic alloys.
The art of building was especially highly developed.
Lyrical poetry was coming into being, especially in the form of religious hymns that were intoned by the priests to the accompaniment of the beating of cymbal-like copper plates at the sacrificial rites.
The cult of death was known over the entire island.

The island was divided into three realms that had a common sovereign ruler. In one of the realms the succession to the rulership descended by both the male and the female lines. The supreme ruler was in addition the chief servant of the temple.
On this island the eldest of the Youngest, (later known as Jesus of Nazareth), was incarnated for the third time, as prince and high priest.
He was greatly loved by the people for his humane and gentile rule, he made several religious and ethical laws, but his attempts to abolish polytheism did not succeed. His incarnation on this island left few traces upon the culture of the people, since he died in the same year that the island disappeared into the sea. His memory lived with those who escaped the destruction by fleeing and was preserved through many generations. He was regarded as a divine emissary.
Some of the islanders who survived the catastrophe fled via the intervening islands to the coast of North Africa and slowly, through several generations, migrated as nomads eastward to the valley of the Nile, where they settled. Legendary accounts can be found in ancient Egyptian scriptures telling of a God of the Light who for a time assumed human form. These accounts refer to the incarnation of the eldest of the Youngest on the vanished island.
A few individual islanders fled to the Iberian Peninsula and were assimilated by the people living there; others reached Central America, where they encountered descendents of the Teotihuacans (or Mlawayans). After long and bloody conflicts they succeeded in seizing territories extending from the peninsula now known as the Yucatan, 1) over the Isthmus of Panama 1) to the northwestern coast of South America. From there they spread northward to large areas of Mexico and southward and south westward along the coast to the lands that are now known as Peru and the upper part of Chile.
The culture that they brought with them became greatly influenced by that of the Teotihuacans, especially with respect to idolatry and the associated human sacrifice. The people from the island kingdom gradually merged with the Teotihuacans, their culture degenerated and their descendents, the Nahuacans, Aztecs, Incas, Toltecs and several other tribes whose names are only remembered in ancient Indian legends, never attained the high cultural level of the Island people.”

Toward the Light is a message to mankind from the transcendental world, published in 1920 in Danish by Michael Agerskov. Translated into English in 1979. 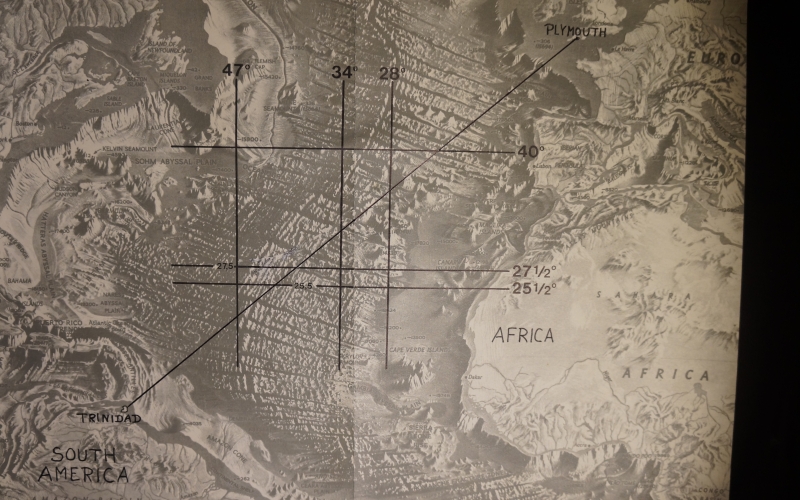 Information regarding the location of the lost island of Atlantis according to our source. See text at the left.